We've partnered with Bolton FM to bring exclusive interviews from our directors live on-air and in podcast format post-broadcast.

If you missed our broadcasts- don't worry! You can listen to them in podcast format below. We'll be adding more podcasts to this page after each broadcast, so stay tuned for more! 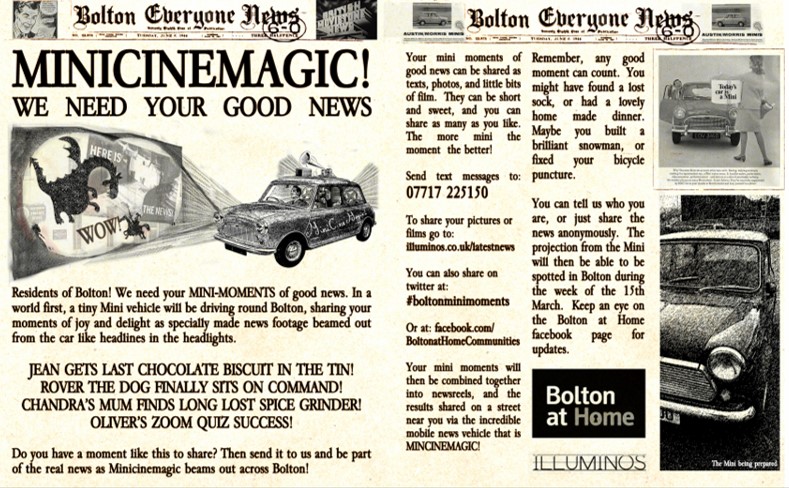 The ‘MiniCineMagic’ initiative will see an old-style 1990 Mini touring the borough to project images and video featuring people’s good news on homes and buildings.

The Mini will tour Bolton after sunset from Tuesday 16 March. We’ll share more details of the neighbourhoods being visited and live stream it from our Bolton at Home Communities Facebook page.

To learn all about the project and how to get involved, give the podcast below a listen. You'll hear from Housing Arts Officers Gaynor Cox and Shonagh Ingram from our Community Investment Team, along with brothers Rob and Matt Vale from Illuminos (https://www.illuminos.co.uk/).

Click here to read more about the MiniCineMagic project.

Listen to the MiniCineMagic podcast

10 March 2021, 11am, 29 mins
Learn all about the innovative 'MiniCineMagic' project, which began in March 2021. This podcast features Gaynor and Shonagh, Housing Arts Officers from our Community Investment Team, as well as brothers Rob and Matt from Illuminos (https://www.illuminos.co.uk/). 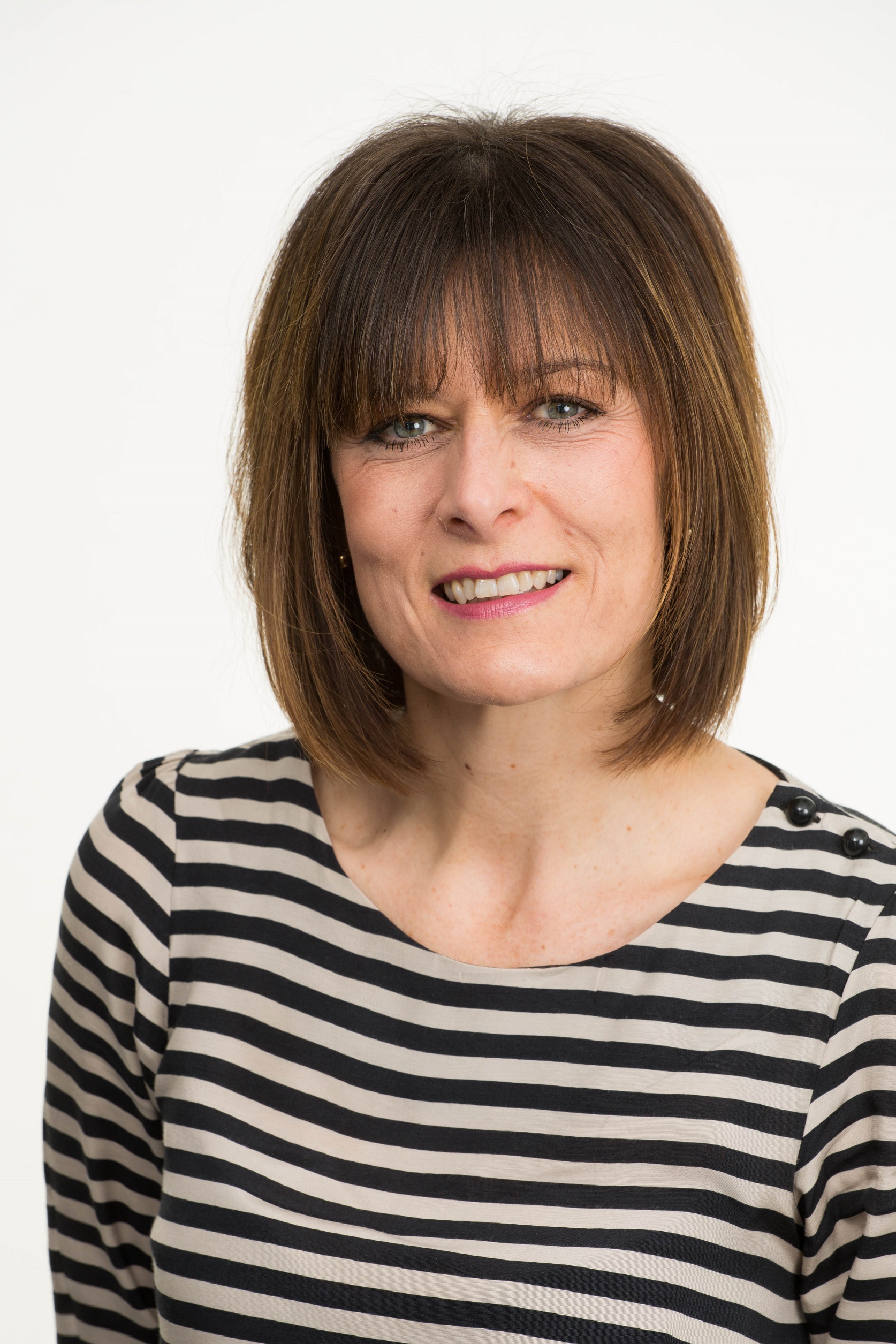 Noel has been working in the sphere of social housing in the northwest for more than 15 years at a senior level, having previously worked in London for 10 years before that. Her experience spans all aspects of general needs and supported housing management, property maintenance and investment, regeneration and new homes development.

Noel has a keen interest in the health and wellbeing, and financial inclusion agendas and how these two very important factors can directly help to improve the lives of customers and the communities and neighbourhoods we serve.

25 February 2021, 11am, 32 mins
In this podcast, Noel's joined by Dave Bagley (Chief Executive of Urban Outreach Bolton) to discuss how we and our partners in/around Bolton have banded together to support Bolton's humanitarian response to COVID. To learn more about Urban Outreach Bolton, click here.

26 June 2020, 10:30am, 7 mins
As well as being our Deputy Chief Executive, Noel's also chair of the Bolton Econmic Prosperity group, which focusses on making the most of Bolton's 2030 Vision. She chats with Bolton FM's Keith about creative approaches to supporting Bolton's smaller/independent businesses in light of the pandemic- including helping them to reopen safely and taking more of what they do to the web. 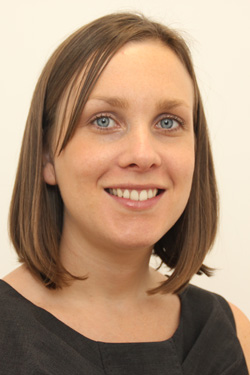 Her well-deserved win really painted a vivid picture of just how good she is at looking after her team. She joined Bolton at Home as a Management Support Officer before progressing to her current position as Money Advice Manager in 2014- and the fact that seven members of Hayley’s team independently nominated her for the award speaks a thousand words as to just how much of an ‘Inspirational Employee’ she really is.

“I’d just like to say a huge thank you to my team for nominating me. I’m genuinely thrilled to have won.”

Hayley’s skill in both leading and supporting the Money Advice Team has not only resulted in happy colleagues- but happy customers, too. During 2019 to 2020, the team supported over 1,300 households to secure a total of £6.5 million in financial gains, and they’re here for you or someone you know, too. Click here to learn more about how our Money Advice Team can help.

26 January 2021, 11:20am, 20 mins
In her interview with Bolton FM, you'll hear Hayley talk all about how our Money Advice Team could help you or someone you care about. Hayley also chats about our 2021 'Pension Top Up' campaign, which aims to encourage around 43,000 people who haven't claimed their share of £76 million in Pension Credits to claim theirs. Tom, our Energy Advisor (from Starts with you) gets a mention, too. Listen below and see how we could help.
Click or tap below to listen: 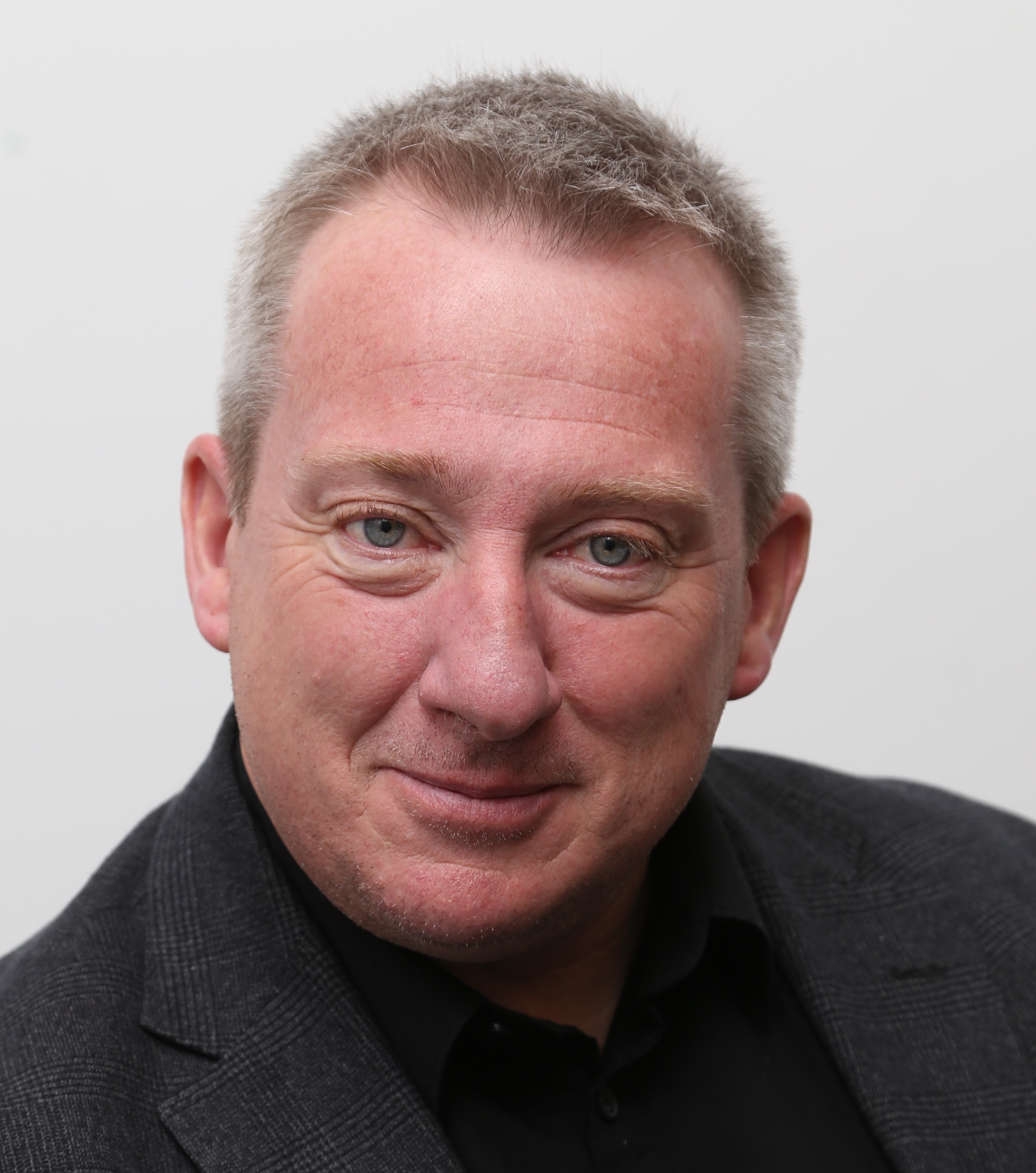 After initially working as a funeral director, Jon made the leap into housing in 1987 and gained his wealth of experience with a wide variety of roles in management and tenant participation.

Jon became a Chief Officer at Bolton Council in 2001 and has been the Chair of the Greater Manchester Consortium for refugees and asylum seekers since that time.  In addition, he had a unique joint role across the Local Authority, ALMO (Arms Length Management Organisation) and Strategic Housing Partnership, managing a wide range of housing services as well as responsibility for the development of affordable housing.

He was awarded an OBE in 2007 for services to housing.

In April 2010, Jon became our Chief Executive, while we were still an ALMO, and has led our transition from ALMO to a registered housing provider and charity, and now charitable community benefit society, delivering a wide range of housing and community based services across all neighbourhoods in Bolton.

Jon is also Chair of Greater Manchester Housing Providers, a partnership of 27 housing organisations, including Bolton at Home, which together house over half a million of the city region’s residents. GMHP members share a common set of values and goals to provide quality affordable homes, tackle homelessness, reduce pressures on health and social care, support local communities, contribute to the Greater Manchester economy and help people into employment.

Friday 4 December (Climate Emergency Survey), 11:00am, 13 mins
Jon discusses with Bolton FM's Keith Harris around how he's chairing a Bolton 2030 Vision group which focusses on tackling climate change in the borough. Click here to learn more about the Climate Change survey Jon mentions in his podcast.

4 June 2020, 12:00pm, 21 mins
In his podcast, Jon talks all about the impact the pandemic has had on what we do, including furlough, staff working from home, delivering our services differently, and how we plan to operate going forward. Jon also talks about how our staff have been volunteering alongside partners in The Bolton Family to deliver around 800 food parcels a week to those in need. Wanderers fans: stick around until the end to hear Jon's thoughts on football! 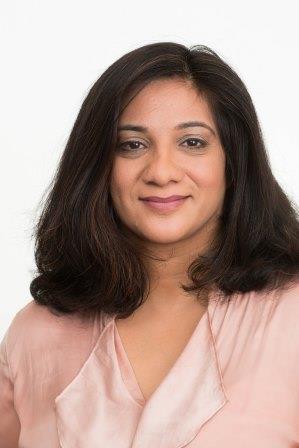 Tony Cottam - Head of Employment and Enterprise and UCAN Centres.
Tony came to work for Bolton at Home 14 years ago as a UCAN Centre Manager because he loved the UCAN centres' informal approach and their absolute focus on customer service. Having had over 70 jobs he feels he's perfectly placed to head up a service where we offer help to those looking for work.

He's passionate about the work he does and heads up a team that's full of people who care deeply about improving the lives of our customers. What drives him and his team is that nobody should be disadvantaged because of where they live. He says, ‘Talent is everywhere but opportunities aren’t and our task is to provide the platforms and the networks of support so that our customers can get those opportunities that would otherwise be denied’. 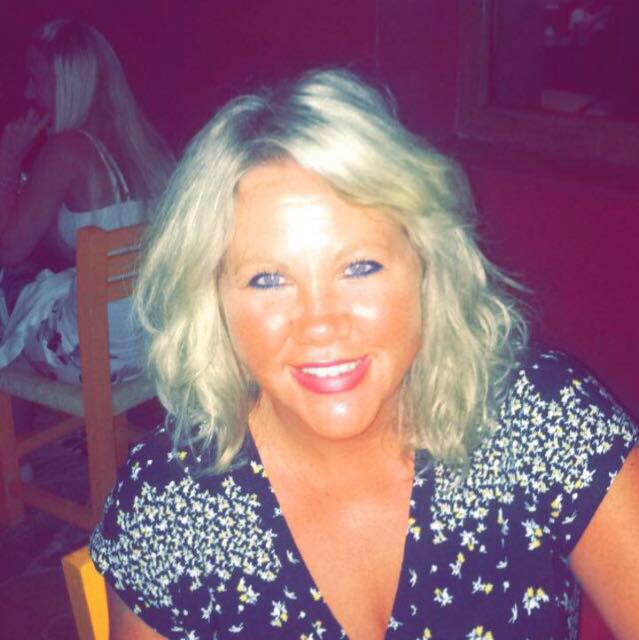 Carrie Riley - Employment and Enterprise Manager
Carrie is our Employment and Enterprise Manager and has worked with us for over 10 years. She previously worked within a social regeneration setting and came to Bolton at Home to specialise in employment, skills and enterprise. Helping people become economically active motivates Carrie to design and deliver the most effective services for customers.
She's all about helping our customers get back into work or get a better job.

Listen to Tony and Carrie's Podcast

6 August 2020, 11am, 21 mins
Hear Tony and Carrie talk all about how the Employment and Enterprise team and our UCAN centres can help out- even during a pandemic. Because they're not driven by numbers or strict targets, the team takes time to listen to what customers need, and pulls together resources to meet these needs.
Learn more about our Employment and Enterprise team at: www.boltonathome.org.uk/getting-into-work 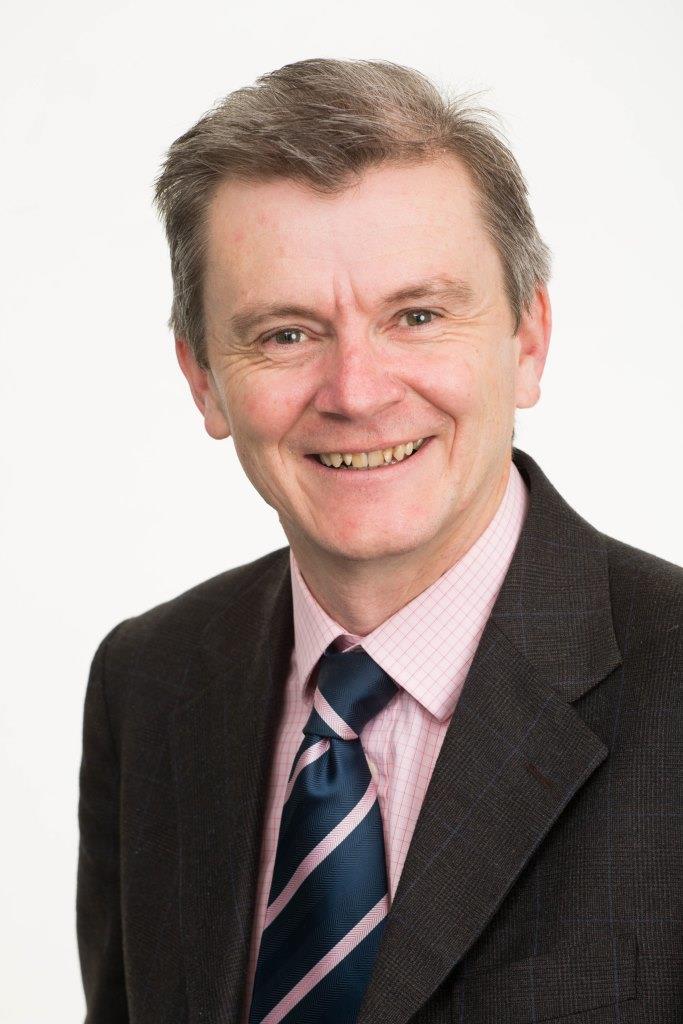 Edward trained as an accountant at Trafford Council before joining Stockport Council where he looked after the accounts of the council housing prior to joining Bolton at Home in July 2003.

Edward was appointed a Chief Officer at Bolton at Home in 2016 having been part of the team which saw the transfer of the housing stock from Bolton Council in 2011. Edward leads on business and financial planning, treasury management & fraud and risk management.

Edward completed 9 years as a board member at Adactus Housing Group in 2017 and is also a governor at Little Lever Academy.

12 March 2020, 12:00pm, 20 mins
In his podcast, Edward talks about rents, what we've achieved through our Development Programme, ensuring value for money, and some of our plans going forward. 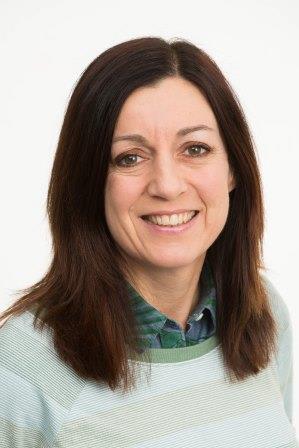 Lisa oversees a diverse portfolio that includes IT, information governance, our Contact Centre and Customer Care Teams, and marketing, public affairs and communications.

Lisa’s responsibilities include driving forward our digital agenda for the benefit of colleagues and customers, ensuring we meet our legal compliance requirements for data protection, providing a first-class customer service experience and supplying timely and relevant information via our website, publications and social media platforms.

Alongside her role with us, Lisa is also a trustee of BACKUP and Regional Councillor at the CBI (Confederation of British Industry).

3 January 2020, 11:00am, 28 mins
In her podcast, Lisa talks with Bolton FM about some of the ways our staff have made a difference in our communities, as well as The Bolton Family's new 'Hope for Change' initiative and more! 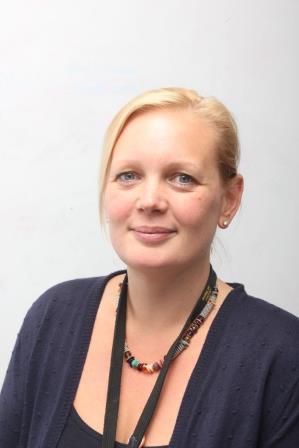 Starting out as a Furnished Accommodation Officer for Rochdale Council, Gemma has now worked in housing for over 18 years.

Before she initially joined us as a Community Housing Manager, Gemma had also worked with Irwell Valley and Rochdale Boroughwide Housing, helping to deliver their regeneration programmes. Along with her current role with us as Director of Housing Services, she is currently the chair of the GMHP’s (Greater Manchester Housing Providers) supported housing group and a trustee of Bolton Community Transport and Furniture Services.

3 October 2019, 12:00pm, 25 mins
Gemma talks with Bolton FM about her role and how we go beyond the bricks and mortar to address complex needs in the borough.